Vital Viper is a moderator on the MCCP forum renowned for his popularity. Vital Viper was one of the charter members of the staff upon MCCP's launch and has remained a part of the staff despite initial controversy with New Horizon Interactive.

This article is a stub. You can help Miniclip Club Penguin Forums Wiki by expanding it.

Although most MCCP staff members are known for something, Vital Viper is ostensibly the most well-known albeit for vague reasons. His popularity predated MCCP (in both "new" and "old" forms) and seemed to follow him when he joined. Vital Viper has an immense positive influence in the community and naturally was asked to be a moderator on the new MCCP forums when they opened (a disliking of him and other Club Penguin personalities prevented Vital Viper and others from becoming moderators on the original Miniclip forums).

Although in later years as community members age his activity has dipped, but his image of a positive role model ("Nice is cool!") is what helped cement his popularity in Club Penguin history and is one of only a small handful of notable members who aren't Beta Testers. He owns and operates both VitalViper.com as well as The Important Snakes, MCCP's second unofficial chatroom - the successor to IAteAFish's Bribble Chat which catered largely to the community fostered on The Old Forums. He also maintains his YouTube account and makes videos of parties and Club Penguin related media.

Many have difficulty articulating why they like Vital Viper so much. He himself claims ignorance for the cause, admitting that he has no idea why people "just like me". It's been suggested the reason people like him so much is his very confident personality, which some view as even egotistical, leading to small scuffles amongst dissenters.

A common in-joke amongst MCCP users is a kind of "Dracophile vs. Vital Viper" rivalry that is largely a gimmick, however at one point the tension was very real. Dating back to The Old Forums Vital Viper was one of many users dissatisfied that Dracophile (then known as RFS), a person who literally knew nothing about Club Penguin, was now suddenly in charge of supervising the new Club Penguin forum. Although Dracophile made an effort to quickly immerse himself in the game and community and learn what he could he was met with resistance from Vital Viper, QAZARPENGUIN, and other members of the community notable at the time.

At one point Dracophile threatened to ban Vital Viper (as well as QAZARPENGUIN who actually was later banned) but backed down from his threats of action solely because Vital Viper wasn't actually doing anything wrong. Instead Dracophile rigged the voting of the "Club Penguin President" poll in favor of Tom (then known as Big Balla) as a means to "teach him a lesson about ego".

With the advent of IAteAFish and his Bribble chatroom that became popular among forum users Dracophile was able to finally meet Vital Viper and talk to him. The two settled their differences and even spent several months hosting a late-night chat "show" where they provided commentary on re-runs of The X-Files.

With the launch of MCCP, Vital Viper was one of the first staff members but controversy arose instantly when Pendragon, a moderator from New Horizon Interactive, claimed that there was "suspicious activity" related to his accounts that hinted towards hacking and foul play. Vital Viper was temporarily dismissed from the staff by the request of NHI while Dracophile and Vital Viper spoke against the allegations.

Before the founding of MCCP Vital Viper had previously shared some of his accounts with other members such as Waitor. Freely handing out his "less popular" accounts proved to be a bad move as whatever they did became attached to his name. Finally at the end of the discussions the evidence proved "inconclusive" and Vital Viper was reinstated as a full moderator on MCCP, a position he continues to carry.

So far few people have met him, only a couple including Orangedude95, a famous wannabe on CP 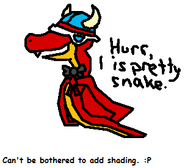 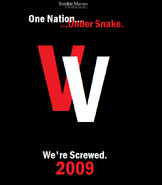 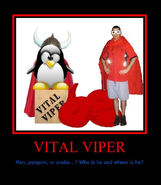 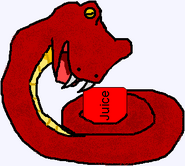 Retrieved from "https://mccp.fandom.com/wiki/Vital_Viper?oldid=6197"
Community content is available under CC-BY-SA unless otherwise noted.