This article is a stub. You can help Miniclip Club Penguin Forums Wiki by expanding it.

RFSHQ (full titleRadio F Software Headquarters and temporarily Really Fun Stuff Headquarters in 2008), launched in 2004 by Dracophile, was a comedy site that was abandoned in 2008 and ultimately fell offline sometime thereafter.

Radio F was originally founded under another name in 1995 by Dracophile and one other individual. During this time Dracophile was best known for his video game reviews, and would soon go on to become the group's media director.

Dracophile originally meant for the site to be a personal Robot Arena II fan site where so he could host his game mods. However, later he would begin to post comedy articles and the site shifted from being a Robot Arena II fansite to the comedy site it was best known as.

At some point because of Dracophile's close relations to RFSHQ a number of MCCP members joined the RFSHQ forums. The community that was already there resented this. Many accused the new members of kissing up to Dracophile among other things.

On July 22nd 2008, Dracophile officially resigned from the site and the forum community because of real life issues. Having officially lost their main writer and founder the site's community couldn't last. After his resignation RFSHQ earned the retronym "Really Fun Stuff HQ", a name that co-owner Goose gave to it while he hosted his game projects there. A little less than a year later Dracophile purchased the domain GatorAIDS with the intent to "do something" with it and RFSHQ co-owner Goose left to pursue his game production fulltime at TrackMill. In a twist of irony Dracophile now works for Goose at TrackMill Games LLC where he is in charge of conceptual art and game design. 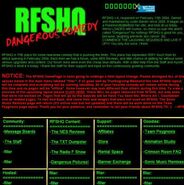 Retrieved from "https://mccp.fandom.com/wiki/RFSHQ?oldid=5991"
Community content is available under CC-BY-SA unless otherwise noted.